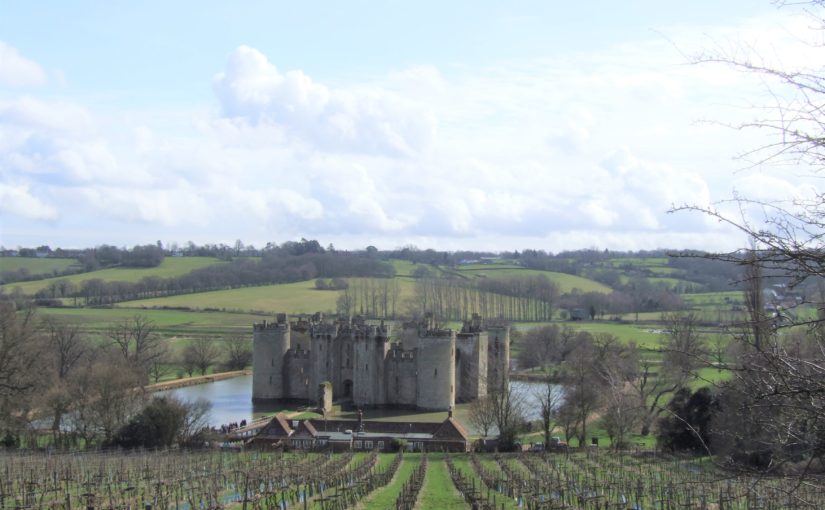 Many readers of the Castle Studies Trust blog will be only too familiar with Bodiam Castle.  It is the most-discussed late medieval castle in England, and probably in Europe.  Over the last ten years I have worked with a team of researchers from Northwestern University and the University of Southampton, in partnership with the National Trust.  We carried out a new survey of the building, a topographical and geophysical survey of the surrounding landscape, and a synthesis of the extensive ‘grey literature’ on the site.  Our work was published in the 2017 volume Lived Experience in the Later Middle Ages; digital copies are freely available here.  We deliberately avoided older debates, and instead stressed a landscape of work and the variety of lived experiences of different people as they worked and moved around the castle and local landscape.

In this short blog post, I want to highlight one point:  Bodiam needs to be understood as a multi-period site and landscape.  One of the mistakes of the old ‘defence vs status’ debates was to see Bodiam simply as a creation of the 1380s and of one man, Sir Edward Dallingridge.  Our work suggests rather that the building and its surroundings form a distinctive place with its own cultural biography that should be understood over the very long term, from the Palaeolithic to the WWII pillbox.  It is a place that has seen reworking and recasting by different social groups over the centuries and even over the millennia.

The stone fabric of the castle does, indeed, date largely to the 1380s, and the use-life of the stone structure was relatively short; it was probably derelict and rarely used by the end of the 15th century.  However, its story is not just that of one man.  Bodiam was a manor of the Wardedieu family, which Edward inherited through his marriage to Elizabeth Wardedieu.  Alice Beauchamp, a wealthy widow and subsequently warden of the infant king Henry VI,  married John Dallingridge, son and heir of Edward; John died soon after his father, and Alice became chatelaine of the castle for 35 years until her death in 1443 (Johnson 2020, 321).  Usually presented as the creation of a single powerful man, Bodiam then was one of the residences of a powerful woman for much of its active use.  The elaborate stacked, double suite of ‘private’ chambers at the upper end of the hall needs to be understood in this gendered context.

Much of the internal fabric, and most of the barbican, was ‘robbed’ of building stone in succeeding centuries; many visitors stopped to leave their mark in the form of graffiti.  In the 1830s, ‘Mad Jack’ Fuller bought and restored the site and landscape.  Fuller’s wealth came in part from his ownership of enslaved people on plantations in Jamaica, as the recent National Trust report describes.  In the 1920s, the castle was restored again by ex-Viceroy of India Lord Curzon; Curzon of course was also responsible for the restoration of the Taj Mahal.  His activities at Bodiam included the failed construction of a cricket pitch (the selected site, which he named ‘the tiltyard’ but which was in fact the basin of the old millpond, was not an ideal choice).  The later cultural biography of Bodiam, then, is part of a story of colonialism and postcolonialism.

However, it is the prehistory of the site – its enduring importance as a critical place in the landscape – before the 1380s that most fascinates me.  The castle itself was ‘fitted in’ to an earlier framework of manorial site, village tenements, river crossing and wharf.  The whole assemblage sits at the junction of the Weald and the Rother Valley. The Kent and Sussex Weald, with its rolling hills, heavy clay soil and extensive woodland, contrasts with the floodplains below, running out to Romney Marsh.  Climatic variation and the troubled history of land reclamation has meant that at different times, the valley has been shallow estuary, marshland, or fertile fields (it will return to shallow estuary in 100 years if climate change continues).  Bodiam sits at the lowest crossing point on the river Rother, on a N/S Roman road, at a point which was a ford but which had a bridge from the 12th century onwards.

When I lecture on Bodiam, I like to suggest to audiences primed for discussion of knights, gunports and the Hundred Years War that the critical moment in the biography of the Bodiam landscape is not the 1380s, but rather the Early Bronze Age, when the complex interaction between human and environment meant that peat accumulation in the valley stopped and was replaced by alluvium.  And I like to go back still further, to a time in the deep past when the valley was some metres deeper and the surrounding hills some metres higher, giving a less comfortable and more rugged feel to the landscape.

Jacquetta Hawkes (1967) famously said that ‘every generation gets the Stonehenge it deserves – or desires’; the same, arguably, is true of Bodiam.  The Bodiam for our generation is, in part, a place of cultural biography and long-term climatic change, where humans have worked with and through the landscape to create, maintain and transform a place that has had an enduring importance over the millennia.