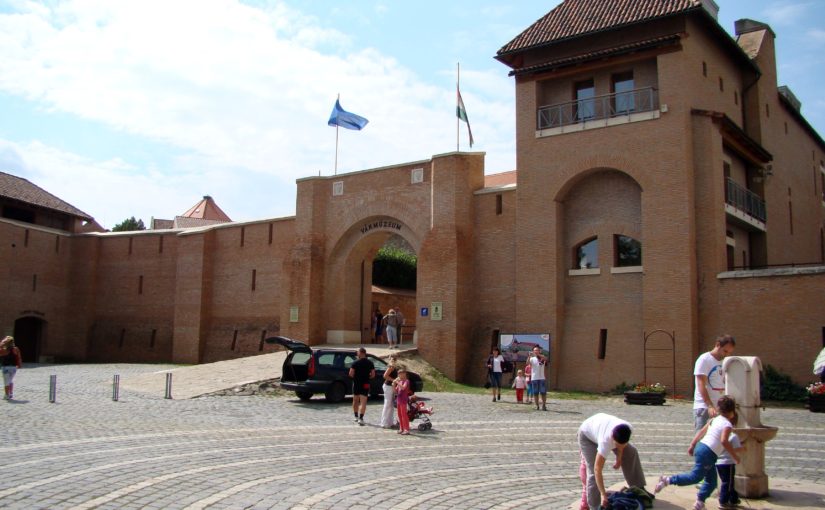 This is an edited version a talk given by Béla Zsolt Szakács gave at the Leeds International Medieval Congress in July 2018 and published in the Castle Studies Group bulletin.

Since the political changes of 1989/90, the countries of East Central Europe have been trying to overcome the century-long lagging behind Western European regions. An important element of the rebuilding of national identities in these territories is the ‘glorious’ medieval past. Understandably the visual expression of this medieval past is a focus of political and cultural interest. Castles are primary objects – so to say, victims – of this interest.

The year 2000 was celebrated in Hungary with a special pomp since it was not only the second millennium of Christianity, but also the 1000- year anniversary of the Hungarian kingdom was established by King Saint Stephen (c.1000–38). As a result of this, there was a great need of memorial sites, however, practically all important royal monuments and residences had been destroyed during the Ottoman wars and the Baroque period.

One of them is the royal castle of Esztergom, the former capital of the Hungarian kingdom and centre of the Catholic Church. Excavations of the surprisingly well-preserved Romanesque castle started in 1934 and the first phase was finished by 1938. By 2000, further elements of the royal (later archiepiscopal) castle had been identified.

Following the plans of Tibor Gál, a renowned Hungarian architect, a postmodern reconstruction was carried out at the site. The new building complex incorporated the Romanesque and Gothic remains of the palace with additions designed in a style that recalls, but does not imitate, the medieval past of the site. The courtyard was closed with a gate that never existed in the Middle Ages. Around the courtyard, remains of the Romanesque palace and a Gothic audience hall are standing. Although some of the windows were partially preserved, they were fully reconstructed, in other cases they were imitated by modern steel constructions. The results of the whole work were harshly criticised for being confusing and totally alien to the medieval original.

Another historic monument extensively rebuilt in 2000 is the Royal Palace of Visegrád. This romantic site – near to Esztergom and Buda, capitals of the kingdom – was a royal residence in the 14th century and an important hunting lodge of King Matthias (1458–90). It was destroyed during the Ottoman wars, and excavation of the remains began in 1934 and are still continuing. The most spectacular part is the north-eastern palace with its courtyard. The corridors around the courtyard were vaulted, the imprint of which were discovered during the excavations. With the help of the in-situ corbels and the excavated ribs a reconstruction of the east wing was carried out in 1952. This was continued with smaller additions in 1970, resulting in a complicated architectural complex of terraces, ruins and reconstructed building parts. In 2000 the palace was extensively rebuilt incorporating all the previously discovered and reconstructed elements. This was not a full reconstruction as the additions stopped where no information was available.

Nevertheless, this resulted in a still ruinous palace with many unverifiable details. The whole concept was based on the studies of Gergely Buzás, archaeologist and art historian (later director) of the local museum. His pioneering monograph published in 1990 contained a possible reconstruction. However, while the drawing is a scholarly attempt of a theoretical reconstruction, the building work in 2000 made permanent the understanding of the castle at a particular point in time. The vaulting reconstruction of 1952 has already proved to be erroneous, but has been never corrected. The present, much bigger volume of the reconstructed loggiaa (a covered gallery) is still debated.

These actions, in 2000, were strongly connected to the memorial year and were supported generously by the government which needed representative sites for political purposes. They represented different methodologies: the postmodern reconstruction which did not imitate medieval forms but was inspired by them and a scientific reconstruction which claimed to be authentic. Visegrád was the most extensive but was followed by many other examples in the next decades.

One them was the castle of Diósgyőr in Northern Hungary, now part of the modern city of Miskolc. This important site was a royal castle built by King Louis the Great of Hungary (1326–1382) in the second half of the 14th century. Later it became the property of the Hungarian queens who made some modifications during the 15th and 16th centuries. Beside its political significance, this castle is regarded as an outstanding monument of Hungarian secular Gothic architecture.

Since the 18th century the building has been in a ruinous state: only the four towers standing on the four corners have been preserved more-or-less intact (but without the uppermost floors and the roofs), all the palace wings have been destroyed. The state of preservation of the ruins deteriorated during the last decades of the twentieth century.

Shortly after 2000, plans were drawn up by architects in order to preserve the existing walls by new additions, which led to the idea of a radical reconstruction. The reconstruction was partial, keeping one of the towers in its ruinous state, and leaving the western wing unfinished However, many details were totally reconstructed which provoked heated debates.

One of the reconstructed rooms is the knights’ hall. The vaulting system is authentic, but the form of supporting piers is not known. The present room has two windows and two portals on the south façade, although according to an 18th-century drawing, there was only one window and one portal. The additional portal is based on a stone-carving, but its shapes were not followed precisely and it fits better to the chapel rather than the knights’ hall. The windows’ shape follows its presumed 14th-century form, consequently the original late-medieval additions were removed. The reconstruction resulted in the destruction of one of the latest original elements of the medieval building in order to return to an earlier phase; unfortunately, the original form of this earlier window is not known: the present form is purely hypothetical.

All the other wings were rebuilt with Renaissance windows, again without any archaeological evidence. In other cases original elements were destroyed because in their survived form they were not strong enough to support the modern reconstruction. Modern functions were also destructive, e.g. the royal apartment was replaced by an elevator. The amateurish furnishing of the interiors needs no further criticism.

So far we have seen some example of the recent castle reconstruction from Hungary. Nevertheless, such reconstructions can be found easily all over East Central Europe. I will limit myself to three well-known examples.

The first is from Croatia. The castle of Medvedgrad is situated above Zagreb and is a popular destination. It was probably built by the bishop of Zagreb in the mid-13th century. One of the most spectacular elements of this reconstruction is the chapel. This was totally reconstructed using the original carved stones of the supporting and vaulting system, the rose window and the portal. The lower castle ended in a keep which unfortunately collapsed in 1954. Thus the present building is a total reconstruction.

The reconstruction works intensified after 1993, in a period when Croatia was fighting for its independence. The castle of Medvedgrad became a national monument, and a memorial was built there for the victims of the war of 1991–95. Although the castle itself never played an important historical or military role, its position above the country’s capital and the national ideology connected to it, predestined it to be the subject of an intensive and controversial reconstruction. 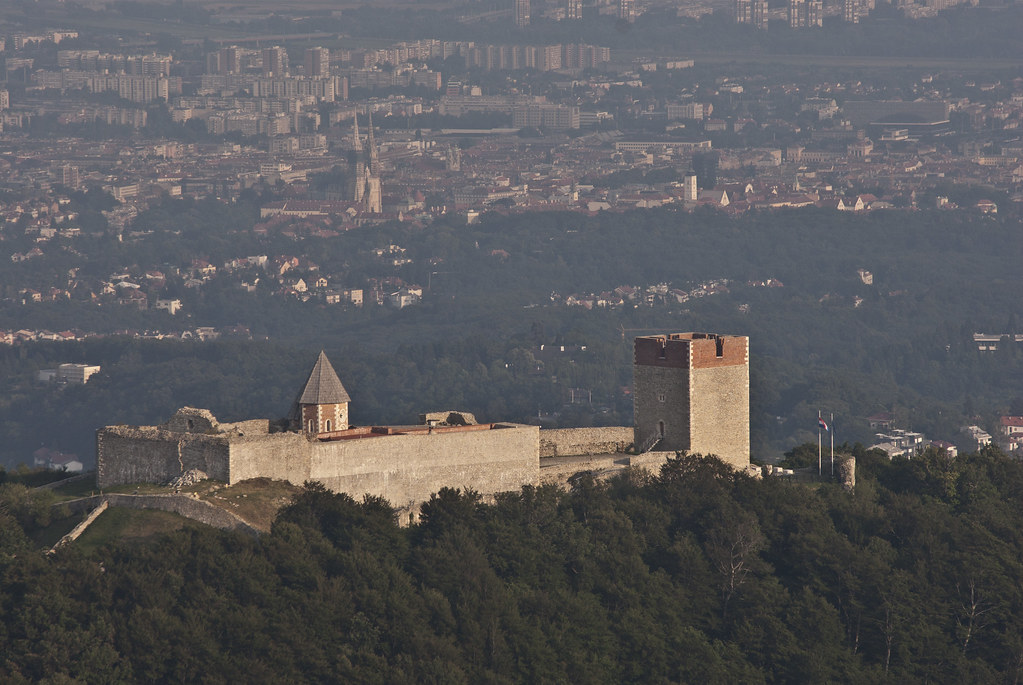 Similar national feelings inspired the reconstruction of the grand ducal palace in Vilnius. It was constructed in the 15th century and rebuilt during the subsequent centuries. During the Russian wars of the 17th century, the castle was heavily damaged and then stood abandoned for more than a century. After Vilnius was incorporated into the Russian Empire, the palace was destroyed in 1801. After long debates, the parliament decided in 2000 to reconstruct the palace as it was before 1801, although precise information was lacking and practically no original part was standing. Parallel to the building campaign, excavations continued which resulted in modifications of the palace project. By 2009 significant parts were ready and the whole complex was finished by 2013. Since then the palace is often used as the site of representative political venues.

A third example can be taken from Poznan, Poland. The castle was situated in the north-west corner of the town. Its medieval shape is practically unknown. The earliest depiction of the town is from 1617 and though it shows the town walls and some palaces, but the donjon is not represented. The whole complex was destroyed in 1945. During the years of 1959–64, the post-medieval buildings were partially reconstructed. The idea of reconstructing the medieval part emerged around 2000. Remains of a medieval tower were discovered which served as a basis for the rebuilding which process started in 2010 with the building complex being finished in 2013. During these works a tower was erected which dominates the façade and is connected to wings imitating medieval houses. As the medieval form of the palace is practically unknown, the entire reconstruction is extremely hypothetical. While the rebuilding lacks scientific basis, it evidently inspired political motivation, creating a new visual highlight in contrast to the towers of the cathedral and the town hall.

The presented importance of the reconstruction in what is presently one of the most prosperous modern towns of Poland, is far from historical reality. Although Posnan was the early capital of Poland, it never played such a role after 1300. Rebuilding medieval castles is more popular today in East Central Europe than ever, however, motivation and methodology may differ considerably. In some cases the scientific background is more solid, although in all cases scholars needed to accept compromises. In other examples pure fantasy dominates the reconstruction, sometimes combined with modernist or post-modern architectural solutions.

Some of the reconstructors argue that the idea of the medieval castle is more important that its material originality. However, the medieval ideas are usually lost and when modern architects, archaeologists, or art historians try to recreate them, these will be certainly not authentically medieval. What they sell to the visitors is the memory of the medieval past; but this memory is a falsification. Whilst reconstructors usually admit that some parts of their work is uncertain, this is rarely manifested at sites, where visitors will believe that what they see is the real (or at least authentic) Middle Ages. That’s how present day reconstructions falsify our memory creating castles that are more medieval than ever.