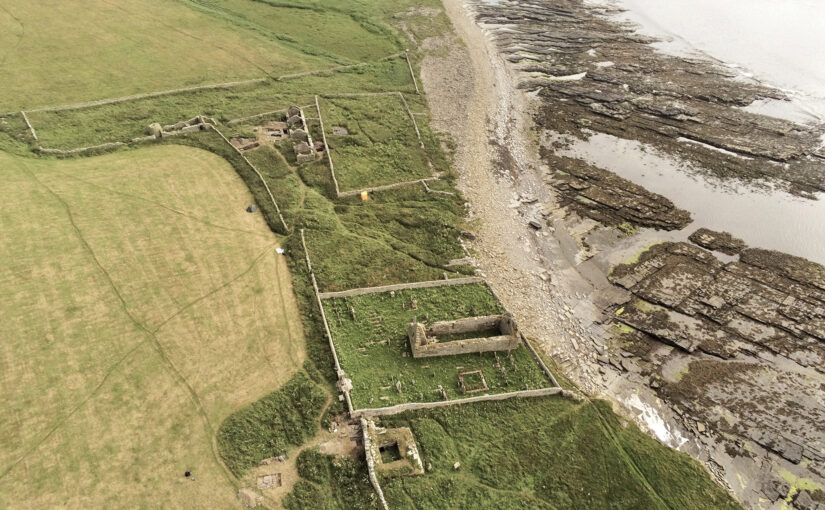 Delayed by the pandemic, at long last our 2020 project to see if the Wirk, in the Orkneys, was a castle is now complete. Project leads Sarah Jane Gibbon & Dan Lee look at what they found.

A programme of archaeological fieldwork funded by Castle Studies Trust was undertaken at The Wirk, on the island of Rousay, Orkney by the Orkney Research Centre for Archaeology during 2020-21 (UHI Archaeology Institute). The Wirk comprises the remains of an upstanding stone-built tower with the site of an adjoining hall range to the east, which are stylistically considered to be 12th century in date. The site was part of a high-status Norse settlement with a medieval chapel nearby (below the present St Mary’s kirk) and Norse hall further to the south at Skaill (Research projects – Landscapes of Change: Archaeologies of the Rousay Clearances & the Westness Estate (uhi.ac.uk)). The project aimed to characterise The Wirk with geophysical survey, undertake evaluation excavation to assess the hall and recover material suitable for radiocarbon dating.

The Wirk was excavated in the 1920s by J. S. Clouston, who had excavated at other Norse castle sites in Orkney. Later dates have since been suggested for the The Wirk (16th century), however the date of the buildings, their function and the relationship between the tower and range remained open to debate. Clouston’s excavations focused on the tower and exposed the remains of a hall and ancillary buildings upslope to the east. He made a detailed plan of the site showing the tower and hall. Few finds were recovered but they did include a highly decorated stone finial now on display in Tankerness House Museum, Kirkwall. The impressive tower survives today, but the hall is not currently visible in the neighbouring field.

Geophysical survey in 2020 was used to characterise the buried remains of the hall range and identified additional features in the vicinity (Geophysical survey at The Wirk reveals buried walls of the hall – Castle Studies Trust Blog). Evaluation excavation in two trenches in 2021 targeted the eastern hall range and located substantial wall footings just below the ground surface (part of an ancillary building in Trench 1 and the southern external wall of the hall in Trench 2). Excavations concluded that the tower and hall range were built at the same time (contra some earlier interpretations by Clouston). Clouston just exposed the footings of the hall walls, without fully excavating around them, but his plan of the site was proved to be very accurate. The hall may have had raised wooden internal floors, certainly in the lower western part, perhaps supported by an internal scarcement (although excavations were too limited to be conclusive).

A significant assemblage of c.13th century worked and moulded red sandstone was recovered from Trench 2 nearest the tower. The red sandstone is interpreted as ecclesiastical in origin and likely to have originated from the former medieval kirk nearby, rather than the hall. The Wirk was unlikely to have been an ecclesiastical building due to the raised floors and association with the tower. Radiocarbon dates from material (charred grain) found in deposits abutting the southern external wall of the hall returned Late Iron Age dates (Pictish period mid-7th to mid-8th century AD). This material is most likely derived from the disturbance of earlier activity at the site during the construction of the hall, hinted at by the surrounding geophysical anomalies, rather than dating the hall itself. It was concluded that the tower and hall are contemporary and likely to be 12th century in date, based on architectural style and stratigraphic relationships observed during the excavations.