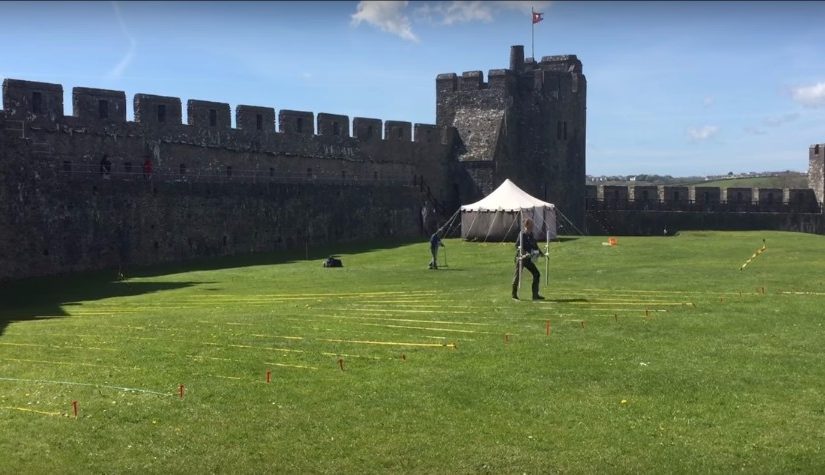 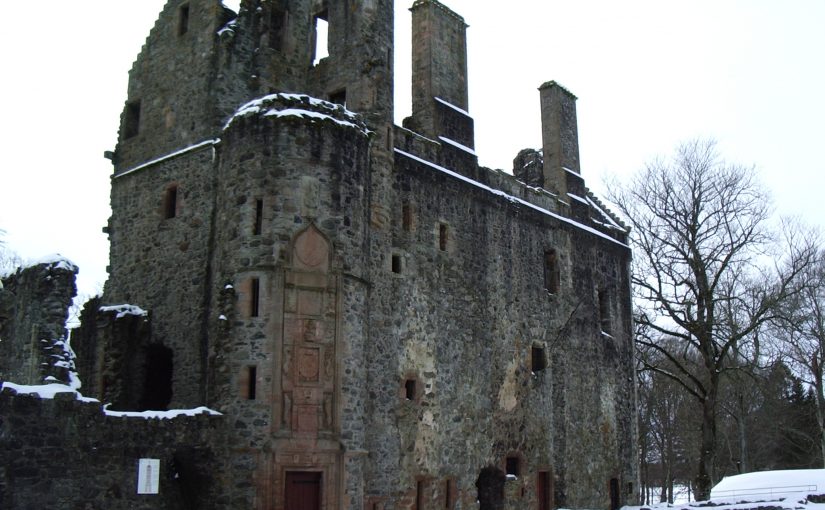 As the days get shorter and the number of times you have to defrost the car in the morning rises substantially, the chance of large gatherings and feasting also increases. People try to figure out how to fit large numbers of guests in their homes, share their news and hopes for the upcoming year and, sometimes, settle business. Thinking about castles as warm and lively places is not necessarily the easiest when they present a cold, wet, bare-stoned backdrop to our lives today but the gathering of people and feasting would have warmed the halls of lords as well.

While huddled over a steaming cup of tea or mulled wine and eating mince pies, I invite you to take a moment to consider a winter gathering that took place at Huntly Castle (Aberdeenshire), the seat of the Gordon family. Huntly is well known for its magnificent inscription commemorating the marriage of George, the Sixth earl of Huntly, to Lady Henrietta Stewart in 1588 and the surviving heraldry within the 16th century palace block, but it has a long architectural history.

There have been three major stages of building at the site of Huntly Castle. First, there was a 12th century timber motte and bailey castle known as the Peel of Strathbogie. Second was an early 15th century L-plan tower. Third was a mid-15th century palace, built in partial conjunction with the establishment of the property as an earldom. Although the palace has been remodelled in the 16th and 17th centuries to what we see in ruins today, the basement largely consists of the first stage of this palace block.

A small gathering of people took place during the first stage of the palace block and the life of the Second Earl of Gordon, George (earl from 1470-1501). On 12 January 1492, George, Earl of Huntly and Lord of Badenoch, passed the lands of Auchannochquhy in the forest of Boyne in the county of Banff to Walter Ogilvy of Boyne and his heritors. This charter was witnessed by Richard Strathquhayne, Prior of Monymusk, Patrick Berclay, lord of Grantuly, James Abirnethy, son and heir apparent of George Abirnethy of Uggistoune, Andrew Hay, D. Patrick Grantuly, rector of the church of Glas, and D. John Andrew, vicar of the church of Bocarne in diocese of Moray.[1] This charter was later confirmed by James IV on 3 December 1495 at Perth (RMS, Vol II, 2289).

Judging from the locations identified with the names of the witnesses, most came from a relatively short distance (under 10 miles) from Huntly Castle. The prior of Monymusk seems to have travelled the furthest, at approximately 24 miles, and is likely to have been seeking accommodation. These six witnesses were likely accompanied in their travel to Huntly Castle but there is no reason to suspect a large retinue. Although it is not necessarily a gathering that suggests a feast of celebration, it was not uncommon for this kind of business to take place at such a gathering. The Christmas celebrations had finished and it may have just been a gathering of neighbours.

The record of this gathering clearly reflects business but is also a gathering of neighbours and acquaintances in witness of this transaction, whether as an aside to an already gathered feast or specifically for this occasion. Against the darkness of a Scottish January, this gathering is a small remnant of the warmth of gathering neighbours, likely drinking warm drinks around a fire, while discussing business among other things.

Find more from Kate Buchanan on Academia.edu or LinkedIn.

[1] All spelling of names and places has been taken from the document as printed in Scotorum, Registrum Magni Sigilli Regum. “The Register of the Great Seal of Scotland.” (1886).