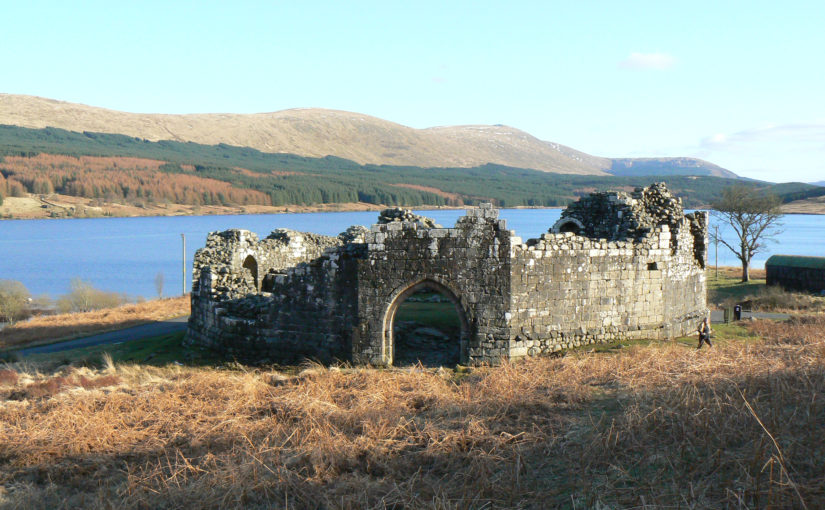 As part of his 2018 PhD thesis on Scotland’s early stone castles, Dr Will Wyeth assessed some of the country’s underexplored sites. One such was Loch Doon castle which provides a case study for two of Will’s key themes of his research, namely the castle’s orientation and its landscape.

Loch Doon was home to a series of small islands, one of which was largely occupied by a medieval castle, comprising an enclosure and within it, parts of a later medieval tower house. In 1935 the loch was dammed and in consequence of the resulting rising water level, the castle dismantled and re-assembled on the modern lochside to the west of its original position.

Connecting its architecture with the emergence of scattered references in documentary sources, we believe it was built by the mid-late 13th-century earls of Carrick, among whose members were Robert de Brus and his son by the same name, later Robert I. The castle appears in the 1370s Scottish (as opposed to the revised early 15th-century English) portion of the ‘Gough Map’ as loghdone. Little store can really be set by its depiction there, owing to uncertain cartographic conventions, though it is noteworthy that it is represented by two castle icons – one on the loch island, another on the adjacent shore.

Loch Doon castle featured in an episode of the war which saw Sir Christopher Seton, brother-in-law of Robert the Bruce flee to the castle. It was besieged and thereafter was surrendered to English troops by Sir Gilbert de Carrick in 1306, who was probably a kinsman to Robert. While the meagre early history of the castle is reasonably well-known, what has hitherto not been explored in great detail are two other elements of Loch Doon Castle. What can it tell us about its builders? And is there evidence for a wider landscape to the castle, and what can this tell us?

Why build it on an island?

There is a significant volume of evidence, and discussion by many earlier and contemporary historians, regarding the long-lived tradition of natural, modified or artificial island lordship centres in Scotland. So was Loch Doon castle referencing this tradition, alive and well in contemporary Scotland? I argued that while there was no question of an island site’s defensive advantages, as well as an acknowledged similarity to the crannog tradition, Loch Doon castle was more of a castle than a crannog-like castle.

The way the castle’s formal entry point, its large pointed portal, opened nearly straight onto water, whilst its work-a-day entry (the sole other access) opened onto part of the island with a beach for ease of landing and more space, suggested similarities with the managed routes of access to castles specifically: the rest of the island can be imagined as small outer yard. Such routes and configurations may have been apparent in contemporary crannogs, but evidence is simply lacking. Both insular castles and medieval crannogs may have been built to draw attention to vast sheets of natural water for which terrestrial castles elsewhere used ponds and lakes. The castle’s long southern wall, forming the exterior face of its great hall, was designed for maximum exposure to the sun, but also towards routes from Galloway in the south.

The castle is situated at the border of two counties; indeed, at the time of its construction, it was located at the south-eastern extremity of the earldom of Carrick. A routeway from the political heartland of medieval Galloway in Glenken runs through the valley of Loch Doon towards the royal centre at Ayr. Another route ran from another politically important area in eastern Wigtownshire into the valley of Loch Doon.

There is evidence for all kinds of medieval activity near to the castle. At the farm sites of Starr and Loch Head south of the castle are traces of rig-and-furrow cultivation assumed to be medieval in origin. The nearby farm of Portmark evidenced later medieval metalworking, and its name suggests a tangible connection to the castle; elsewhere, port– place-names mark the embarkation point for medieval crossing to insular lordship centres. Perhaps this was what the Gough map was representing as a second ‘castle’? Such composite island-waterside complexes are widely recognised in Ireland. Lastly, in the rugged hilly district south of the castle, in neighbouring Galloway, are a cluster of place-names connected to deer traps, from the Gaelic eileirig, as well as the location of a hitherto unattested hunt hall (possibly medieval in origin) at the aptly named ruined building named Hunt Ha’.

What was the castle ‘for’?

It is difficult to establish a conclusive answer. In 1306, Sir Henry Percy seized administrative and military documents stored at the castle for the English crown following its surrender. Whether these documents were at the castle as a matter of course (so making the castle a manorial centre of sorts) or because of the political violence unfolding across the kingdom is not clear. Both may be true. The evidence from the castle and its landscape suggests it was ‘doing’ many things. It was made to be seen from far and wide. Its position by a routeway through the rugged Galloway Hills is typical for castles in general. Its insular setting may reflect a castellar rendering of the crannog tradition, or a Carrick take on the watery landscapes of castles lowland Britain and Ireland. The earldom’s main and older centre – Turnberry castle, on the coast in lowland Carrick and over 31km as the crow flies from Loch Doon – was its only other castle. Thus, Loch Doon castle may have as much been a retreat for leisure, for welcoming guests and the comital ensemble travelling to Galloway, as an administrative centre for the earldom’s extensive upland districts.

You can read Will’s PhD thesis for free on the University of Stirling’s website.