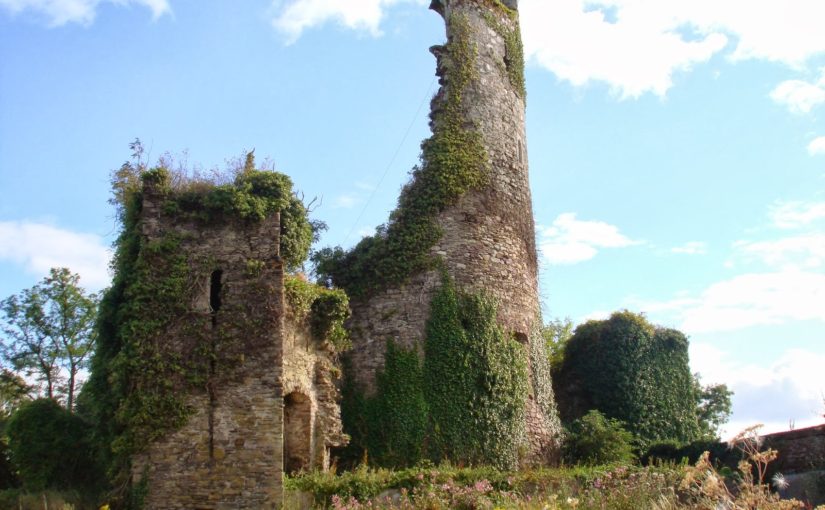 Like medieval monasteries, castles had gardens. These could be places of rest, play and display as well as productive centres for (some of) the food to supply the castle household while also providing curative or medicinal plants. We know that in the Middle Ages, plants were highly valued for their culinary, fragrant and medicinal properties; and, they were considered to have mental and spiritual benefits. What do we know about the plant-life of the medieval castle and its green spaces?

Surviving architecture indicates that some of these spaces were enclosed with relatively high walls, often surmounted by a parapet or at least crenelated. Excavations tell us something about what plants were at castles but there is no certainty about what was grown in their gardens.1 Seeds can be tricky to identify in the archaeobotanical record from reasons as diverse as poor preservation to sampling issues. Beyond general mentions of gardens, medieval historians have noted references to bowers (arched trellis covered with vines or climbing plants) and possible water features as well as hawthorn hedging, roses and juniper trees.2 Many medieval manuscripts show luxurious images of trellising and water features in a verdant green dreamland (Fig. 1). I am not going to suggest that exact replica sites of mythical gardens existed but perhaps we can use these images as a reference point.

So, we know what gardens might have looked like and some of the things that may have been present. What then, do we know about gardening?3 Certain castles, such as Richmond, have latrines that empty into the garden space suggesting that medieval people were good at composting! (Fig. 2) But what about plant propagation and curation? What plants or flowers were grown? Or how?

Nurseries were established at monasteries across Europe in the later medieval period; one existed in London by at least the late thirteenth-century4 and at Kilmainhaim, Ireland during the early fourteenth century.5 Perhaps they also existed at castles? Some medieval manuscripts show images of plants in pots – isn’t that very interesting? (Fig. 3). So possibly plants in pots, like elite households, were on the move.6 If plants moved with their households what types were selected? Were they transplanted to grow in new locations? While extensive archaeological excavation might be able to answer these questions – what if we look at the evidence in front of us: the modern ecological landscape?

Might the modern landscapes of medieval castles give some clue to plants of the past? The study of relict plants – those that survive from the past – involves the examination of modern landscapes for the presence of plants that may have been deliberately planted and cared for by people in the past. An ecological survey of Welsh castles completed in 1994 by Ann Connolly noted that there were clusters of plants with known medicinal uses present at castle sites but notably absent from suitable surrounding terrain.7 This included wild sage (Salvia verbenaca) at Montgomrery and wild rocket (Reseda luteola), as well as henbane (Hyoscyamus niger) at Rhuddlan. The implication is that these plants were deliberately planted at these sites for their medicinal use.

Pioneering work has been completed on relict plants in from medieval monastic gardens in Norway8 and Iceland.9 Fiona MacGowan, working in Ireland noted the presence of yellow wallflowers (Erysimum cheiri) at the windows of the main focal building at Lea Castle, Co. Laois (2014; Fig 4). These are non-native to Ireland and were thought to be frame the windows and waft in good smells. Relict plant studies, as part of wider analyses, is becoming established as a novel way to gain insights into past communities’ growing or cultivation practices as well as potential medicinal and dietary concerns.

‘Sowing the Seeds of Interdisciplinary Work’, the project funded by the Castle Studies Trust sets out to build on this work, and understand if surviving plants at medieval castles which were possibly planted, grown, cared for and used by medieval people can further inform us of medieval lived experiences in the garden and possibly with gardening. Ecological surveys will be carried out at four geographically distant but culturally similar medieval castles sites with diverse landscapes: Adare. Co. Limerick, Castleroache, Co. Louth, Mocollop Castle, Co Waterford and Castlecarra, Co. Mayo (Figs 4-7).

From the selected sites, only Adare has been subject to archaeological investigation and therefore has an associated archaeobotanical report to be analysed.10 Castlecarra is surrounded by woodland which has the potential to be ancient; it is included in the Lough Mask and Lough Carra Special Area of Conservation (Site code 001774). It will be part of the survey. All four have associated settlements and a variety of religious houses from parish churches to abbeys. At Mocollop and Castle Carra these spaces will also be surveyed owing to their relatively undisturbed surrounding landscapes. They will provide an interesting set of comparative sites.

Working with Dr Fiona MacGowan, an ecologist who has a passion for the medieval, we will carry-out the ecological surveys over the late summer (hopefully). Once compiled the ecological reports will be used to expand our knowledge of what plants may have been used or grown at Irish medieval castles by contextualising the results within appropriate historical and folkloric traditions. These findings will be analysed together with of archaeological, historical and architectural details of the four castles sites. We are sure that the results will demonstrate the potential of relict plants studies to enrich our understanding of the ‘green’ lives of people in the past.

Åsen, A. P., 2009. Plants of possible monastic origin, growing in the past or present, at medieval monastery grounds in Norway, in Plants and Culture: seeds of the cultural heritage of Europe, eds. J.P. Morel & A.M. Mercuri. Edipuglia Bari: Centro Europeo per i Beni Culturali Ravello, 227–38.

Thorstad, A. 2019. The Culture of Castles in Medieval England and Wales. The Boydell Press. Woodbridge.

To stay up to date with news from ‘Sowing the Seeds’ subscribe to our newsletter, and you can read more of Karen’s work on academia.edu.