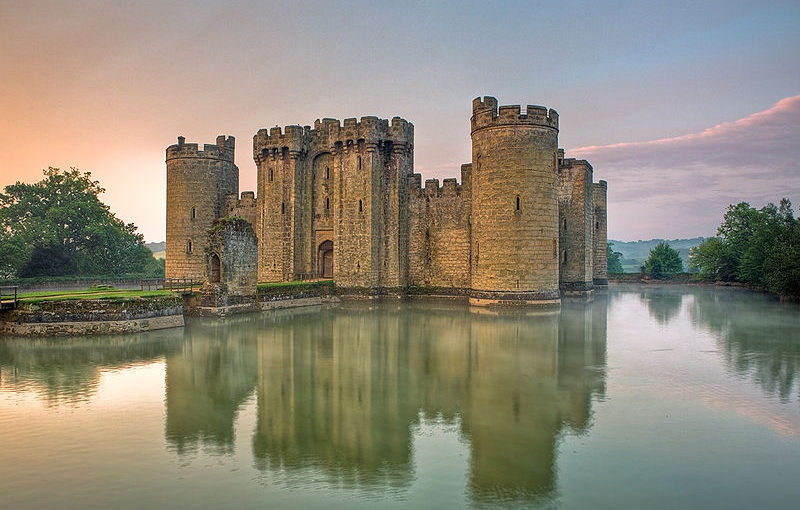 Dr Peter Purton, FSA, Castle Studies Trust trustee and author of recent works on medieval sieges and medieval military engineers looks at his latest area of research, later medieval fortifications and the impact of the introduction of gunpowder.

Castle studies were once ruled (in England at least) by wealthy amateurs, mostly male (Ella Armitage a stand-out exception) and many with military backgrounds. Every aspect of a castle, for them, was determined by military thinking. The late twentieth century counter-attack turned this on its head, stressing the symbolic role of castle-building as expressions of status and power. Some people challenged any suggestion that changes were driven by the need to upgrade defensive capability; and the same argument has been applied when guns arrived on the scene.

Those keen to argue the superiority of the English can always point to the first adoption (in Europe – the Chinese were centuries ahead) of gunpowder, and its first use for war. It’s also true that the English were the first to adapt fortifications to use guns, from the mid-fourteenth century, a little ahead of the Low Countries followed by the French, all places affected by the devastating impact of the struggles we bundle up in the title of the Hundred Years war (1337-1453).

Were loops created for guns also symbolic? If you take account of the historical reality of the time, this argument surely evaporates in a puff of (gun)smoke. I’m working on a new history of changes in fortification in the age of gunpowder with Dr. Christof Krauskopf and we delivered a paper at the (virtual) Leeds IMC in July 2020 addressing this question. We can’t answer the question without knowing the context, and what the builder wanted. The first is usually evident, the second is irretrievable. Across southern England from the earliest days of the war there were frequent seaborne raids by the French and their allies that caused local devastation and serious embarrassment (and loss) to the English crown. People could not know when and where the next attack would come. The response was the preparation of defences designed to use guns (at the time, they were not powerful enough to harm stone walls) from East Anglia (the Cow Tower of Norwich, for example) to Devon (Hawley’s Fortalice at Dartmouth), usually adapting existing defences but often building anew. The royal ‘architect’ (an anachronistic shorthand) Henry Yevele was directly involved in the erection of the Westgate and the reconstruction of the city walls at Canterbury and at private castles in Kent (Cooling, for example). Southampton, having been burnt to the ground by the French, underwent extensive reconstruction of its defences, including (early in the fifteenth century) one of the first gun-towers (the God’s House tower).

Amidst all this very expensive work, in 1385, the castle at Bodiam (Sussex) was put up for Sir Edward Dallingridge, set in a lake and pierced with gun loops and now a picture-postcard National Trust attraction. It has been the centre of a battle lasting longer even than the hundred years war. Forty years ago, the late Charles Coulson famously demolished its military pretensions by pointing out its many flaws from a defensive viewpoint. Bodiam became the peaceful retirement home for a military veteran.

Sometimes you only see what you want to see. Actually, Dallingridge wasn’t retired: he was commissioned to review the defences of the coast, for the king, and was actually wounded in a French attack. His gun loops may not have worked very well and his lake could have been drained – but a French raiding party was unlikely to hang around long enough to find out. In the context, the most that can be said is: we don’t know what he intended.

England swiftly lost its leading position in the race to build fortifications adapted for and against artillery as it became significantly more powerful during the course of the next century, a time when the gap between what princes and their subjects could afford expanded greatly. But many nobles did make provision for guns, and kings still put comfort first (Edward III’s work at Windsor). Between the two extremes of fortresses with evident military purpose and castles designed as palatial homes, others tried to provide for both functions, with numerous examples across the continent.

Perhaps that was what the medieval castle had always been?