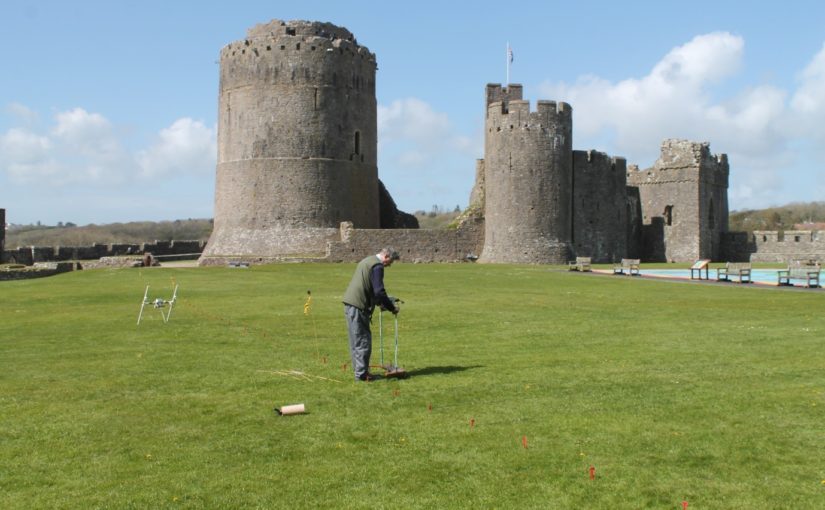 Hello! A personal introduction before we get down to the geophysics. I’m Kayt Armstrong, and I am an advisor to the Castle Studies Trust as a specialist in the use of geophysics in archaeology. I am also a member of the board of the International Society for Archaeological Prospection, and I represent the UK on a European research network about soils and geophysics in archaeology. I obtained my PhD in Archaeological Geophysics from Bournemouth University in 2010. I have worked in the UK and Europe (Greece and Italy) since that time, conducting archaeological geophysics in a variety of research and developer-led contexts. I help the CST evaluate funding applications that have geophysical elements, and also comment on the reports from any resulting work.

If you were a Time Team enthusiast, you probably already know the answer to this one!

Geophysics is the study of the physical properties of the earth (or other planets – you can do astrogeophysics!). It is an extensive term that encompasses whole planets, right down to understanding the microstructures of stone. Archaeological geophysics falls into ‘near-surface geophysics’, which studies the first 30m or so of the ground. In fact, commonly, archaeological geophysics is only really concerned with the top 2m or so; material in the topsoil, rather than the bedrock.

When it comes to Castles, there are three main geophysical methods: earth resistance (‘resistivity’), magnetometry, and ground-penetrating radar (GPR). All three techniques look at slightly different aspects of the sub-surface, and all three have benefits and weaknesses. It is really best to combine methods to get as complete a picture as possible, as they will all tell you slightly different things.

Magnetometry is probably the most commonly used technique in archaeology. It uses sensors to look at small variations in the strength of the earth’s magnetic field, to look for changes caused by buried material. The soil on sites where humans live becomes more magnetic over time, due to things like fires for cooking and warmth and the fermentation of waste material. This material becomes the fills of cut features like pits and ditches. These end up more magnetic than the soil they are cut into.

Structures used for processes involving heating, such as kilns, furnaces and ovens, become even more strongly magnetised and have a very characteristic appearance in the data. Similarly, fired ceramic building materials like brick or tile have a distinctive signal, as do igneous or metamorphic rocks (those modified by heating during their formation).

Magnetometry is very fast, covering upwards of 10ha a day if using the latest equipment. It is also relatively easy for community groups to employ. However, the pace will be somewhat slower using hand-carried single sensors. The plus-sides are the speed of survey and the wide variety of archaeological features that can be detected and mapped. The downsides are that this method is strongly disrupted by ferrous material in the survey environment, and has problems on igneous and metamorphic geologies as happened with the survey of Tibbers in 2014. It is also not very useful for mapping stone remains that are not strongly magnetic (such as some sandstones and most limestones). Modern infrastructure within or adjacent to the survey area has a far greater impact on the results than any buried archaeology (as happened in the Wressle survey of 2019), masking it from detection. It is practically not possible to use this method in urban areas. This method cannot detect smaller structures if they are buried more than about 2m below the ground surface. Features in the first 2m can usually be detected but the size of the anomalies that can be distinguished depends on the resolution of the readings taken. However, this method doesn’t let you understand the depths of the anomalies, and so isn’t as helpful on multi-period sites.

Earth resistance examines how easy it is to pass an electrical current through the ground. The resistivity of the subsurface varies in relation to several properties. Still, the most substantial effect is caused by variations in moisture content. The fills of cut features like pits and ditches (as witnessed in the 2018 survey at Laughton which showed a possible ditch, confirmed in the 2019 excavation and of Tibbers which lead to the discovery of a new inner bailey) tend to have a more open texture than natural soil. They usually also contain more organic matter. This means they are generally wetter than the ground they are dug into. Conversely, buried structures like walls and floors, are usually much drier than the material surrounding them, because they can’t absorb as much water.

This technique can be applied in two ways. You can collect a grid of readings over a flat area to examine the first 2m or so, producing a plan view. You can also collect long lines of readings with increasingly wide measurement points. This is called ‘Electrical Resistance Tomography’ or ERT, and produces vertical pseudo-sections through the ground, and can reach greater depths, typically in archaeology 8-10m.

The plan-view method typically involves 2 probes on a mobile frame, and two remote probes connected by a cable. 2 of the probes inject a current, and two measure the resistance to it. It is especially useful for mapping buried stone structures. It is therefore handy on ‘Castle’ sites where multiple building phases can be expected. It is relatively slow, however, and relies on being able to insert probes into the ground to get the readings. This is fine on a lawn or field, and it can work on paths and gravel, but the results get very noisy, and it isn’t possible over flagstones or tarmac or concrete. You also need to be able to manoeuvre the cables and place the remote probes at an appropriate distance. This method also doesn’t let you understand the relative depths of various anomalies.

ERT is less commonly used in archaeology, but it has some specific applications in the study of large defended sites. Because it can resolve structures at a greater depth than the plan-mode, it can be used to examine the construction of large structures. This includes moats, earthen banks and buried fortification walls, and other such features. If multiple adjacent profiles are collected, the data can be combined into a 3D model of the subsurface, which can help resolve questions about the construction sequence of a site.

Twin-probe (plan-view) resistivity survey is relatively straightforward to carry out. It doesn’t require as much skill on behalf of the instrument operator as magnetometry does. It is however, slow and laborious. The equipment is relatively cheap, and data processing and visualisation are relatively simple. This method is rarely used in the commercial sector these days but is an ideal research tool. Community groups have produced excellent research using this technique. The ERT method requires specialised equipment and a trained collector. The background knowledge needed to correctly process and interpret the data is also high.

GPR only made the odd appearance on Time Team, but in the last decade or so advances in computing (mostly increasing miniaturisation of components, and improvements in battery life) have led to a new generation of GPR kit that is more flexible and affordable.

GPR works a lot like sonar or the sort of radar employed by aircraft. A transmitting antenna sends out radio waves focused into the ground. These propagate downwards and are reflected by abrupt changes in the material of the subsurface. For example, when the waves leave a stone ceiling and move into the vault, some of the waves will be reflected back up. Some will continue on, to encounter the floor of the vault, and anything below it. The reflected waves are collected by a receiving antenna (usually in the same ‘box’ as the transmitter, a fixed distance apart). The strength of the returned waves, along with the time (in nanoseconds!) it takes for them to return is logged and plotted. This is a single trace.

The antenna is dragged along a line, and a series of traces are collected at a small interval (usually every 5cm or 2cm), which are combined together to make a profile. This is effectively a vertical slice through the ground. These are a bit difficult to read because the radio waves emit in a curved shape, so they actually travel in front of and behind the antenna, not just directly under it. This creates distinctive hyperbolas in the data. The depth of signal penetration and the size of the objects you can detect varies with antenna frequency. Depending on the frequency of the antenna, you can look very shallowly and resolve things that are a centimetre (or less) across. Very high-frequency antennas are used to assess the structure of concrete in civil engineering or to image different layers in mosaics and floor coverings. Lower frequency antennas cannot resolve smaller anomalies but can penetrate 10m+ to resolve much larger objects, such as former river beds, large walls or banks and ditches.

Groups of profiles collected in parallel lines can be combined together to make a 3D block of data. This can be processed in a way that allows different horizontal depth slices to be examined (as done at Fotheringhays; see time slice). A new generation of GPR system uses lots of antennas in an array to collect very high- resolution datasets (8cm in all directions), or arrays of different frequencies to quickly collect data with good resolution at multiple depths.

GPR requires a skilled operator to plan the work, collect the data and the process and analyse the results, but it is arguably the best technique for investigating Castle sites. This is because it tends to be good at detecting the sorts of things we would expect to be looking for, for example, voids, buried walls, culverts and surfaces. It can also be deployed inside standing buildings, to look underneath floors or behind walls. It can be used over tarmac and concrete (providing the concrete is not re-inforced!) and does well on most geologies, except for certain kinds of clays, and saline environments like estuaries.

The other advantage of GPR is that the data is relatively fast to collect, compared to earth resistance, and a broader range of features can be detected with it. It is also an inherently 3D method and allows complicated below-ground sequences to be visualised and interpreted. I have seen examples of staircases being visible in the data from 3D GPR, for instance. This technique has made the headlines recently, with the publication of a study of an entire Roman city, Falerii Novi, just north of Rome, by colleagues of mine from Ghent University and Cambridge University.

Geophysics and the Castle Studies Trust

Geophysical approaches form an increasing component of research proposals put to the trust, which is excellent to see! Geophysics can help to answer both broad and specific questions about castle-sites, without the potentially destructive process of excavation. Geophysics also has applications for the conservation of sites and planning for their future management. For example, in mapping the integrity of standing walls using GPR, or understanding the soils and material within earthworks to protect them from erosion in extreme weather events. They can help site managers decide whether an intervention is necessary, and can inform the design of any needed work. Geophysics can also play an essential role in the continuing life of these sites as homes or places of historical interest by mapping areas where conservation or building work is planned to ensure nothing is damaged by the work.