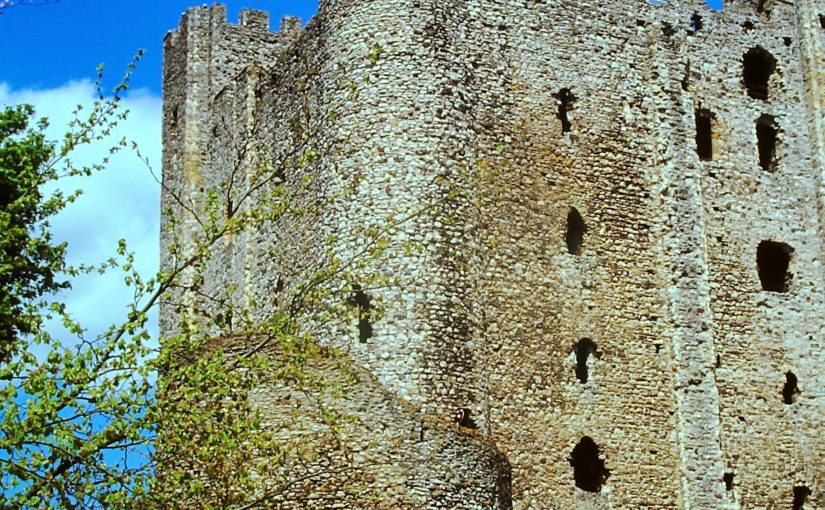 Dr Peter Purton FSA, leading expert on medieval siege warfare examines one of the most famous British medieval sieges, that of Rochester in 1215.

The great donjon of Rochester castle (Kent) is still visible from miles around – including from the Eurostar. It stands above a bridge across the tidal waters of the river Medway and that was one reason why it was subject to a famous six- week siege which ended when an entire corner of the great tower was brought crashing to the ground, leading to the fall of the castle on 30 November 1215.

This was the first big battle in the civil war that broke out between King John (1199-1216) and the barons who had forced him to seal Magna Carta in June of that year. The king got the pope to declare it null and both he, in the south, and the barons, based in London, began to gather soldiers. We know a great deal about what happened because contemporary chroniclers, including eyewitnesses and those closely associated with men fighting there, wrote it down; and because some government records survive. We know the names of the nobles and many of the knights on both sides, of the engineers paid to construct the King’s five stone-throwing siege engines, and the master miners from the Forest of Dean who with their team (altogether 13 miners) undermined first the wall of the bailey and then the great tower itself.

The first castle was built after the Norman conquest but the great tower dated from 1127 when it was built for the archbishop of Canterbury, then William of Corbeil, who shared ownership and use with the crown. It is the tallest keep in the British Isles (125 feet, 38 metres) and unusually boasts two floors above the main level and basement below, divided vertically by a spine wall that gave access to the castle well. Richly provided with latrines and comfortable chambers, two spiral staircases, beautifully decorated stonework, it was a place fit to entertain king or archbishop. But in 1215 none of this mattered, archbishop Stephen Langton ignored John’s demand to hand it over and instead allowed rebel baron William de Albini and 60 or 80 knights, their retinues and archers and crossbowmen, to take possession.

Control of the ancient bridge over the Medway was vital for both sides, and so it became John’s first target once he had gathered an army of several thousand experienced fighters mainly from Flanders, Poitou and Gascony. The defenders resisted every attack for weeks, inflicting many casualties on John’s men. In the end the besiegers turned to their miners, who first broke through the bailey wall (we don’t know where), then, using the grease from 40 slaughtered pigs (‘of the kind not fit for eating’) as an accelerant to burn the props they had used to prop up the masonry while they sapped  the south east corner turret of the great tower, brought it crashing down. The defenders retreated behind the spine wall but had run out of food so surrendered. King John wanted to hang them all  but was dissuaded by his own captains who didn’t want to meet the same fate if the wheel of fortune should turn against them.

To this day one can see the join on the sides of the donjon where the wall had to be rebuilt after the siege.

In 2015 the Castle Studies Group (www.castlestudiesgroup.org.uk) held a conference there to mark the 800th anniversary and I presented a short paper analysing the siege. Now, following an invitation from across the Atlantic, an extended and illustrated version of that talk can be viewed at: