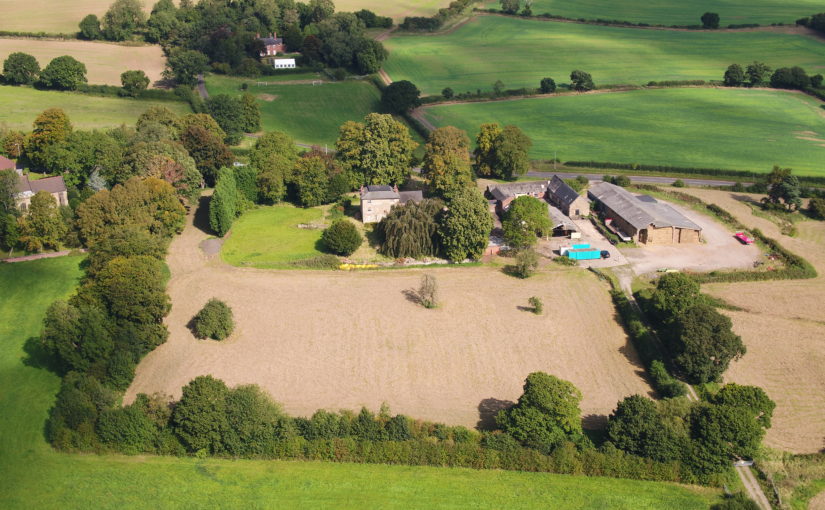 Back in January 2021 Triskele Heritage were successful in a funding bid to the Castle Studies Trust for carrying out a research project at Greasley Castle in Nottinghamshire. Here James Wright of Triskele Heritage explains what they hope to achieve with this project.

The work will focus on the production of an interpretative phased floor plan. The castle, built in the 1340s, has an obscure history and the understanding of its architectural phasing is at best very cloudy. The site is now a working farm and a number of post-mediaeval structures have been conglomerated around the remains of what is suspected to be a fourteenth century courtyard house with projecting corner towers.

The survey will act as baseline research data for a site which has not previously received serious fieldwork or publication. It will also provide a basis for further research and future conservation needs.

Work on the project will start in April 2021 and will be carried out by James Wright FSA alongside Dr Matt Beresford. We are supported in this endeavour by the landowners and Sarah Seaton of the Greasley Castle and Manor Farm History Project.

Greasley Castle was developed for Nicholas, 3rd Baron Cantelupe (c 1301-55) after being granted a licence to crenellate by Edward III in 1340 (Davis 2006-07, 239). He was a significant figure who fought for the king in France and Scotland, served in parliament, founded Beauvale Priory and established a chantry at Lincoln Cathedral (Green 1934). Later owners of the site included John Lord Zouche – one of the few aristocrats proven to have fought for Richard III at Bosworth (Skidmore 2013, 330). After Zouche’s attainder, the castle was given to Sir John Savage in recognition for his military support of Henry VII in 1485 and remained in the family after his death at the siege of Boulogne (Green 1934).

The site is now a working farm and comprises two grade II listed buildings (NHL 1247955 and 1248033) overlying a scheduled ancient monument (NHL 1020943). The buildings sit along the northern perimeter of a 5.18 hectare earthwork enclosure and comprise a multi-phased U-shaped group of structures with an adjacent farmhouse to the north-west. The layout of the site is not well understood, but very limited prior research indicates the potential for a courtyard house with projecting corner towers.

The most substantive work on site took place in 1933 and comprised just two days of rather inadequate and poorly reported archaeological evaluation (Green 1934, 34-53). During the mid-2000s the wider landscape of the site was considered by the East Midlands Earthwork Project (Speight 2006). Greasley is routinely mentioned in surveys of castles stretching as far back as the antiquarian Throsby (1797, 239-42) and the early castle scholar Mackenzie (1896, 448-49). Although these initial commentators were of the opinion that little or nothing remained of the mediaeval castle, twentieth century authors, including Pevsner (1951, 76), his later editors (Pevsner & Williamson 1979, 135), Sarah Speight (1995, 70-71) and Oliver Creighton (1998, 479), noted in situ structures. In the twenty-first century a number of writers have pointed towards the tremendous archaeological potential of the surviving mediaeval architectural features (Emery 2000, 327; Salter 2002, 85; Wright 2008, 49-50, 65; Osbourne, 2014, 39).

Crucially, the potential of the site has never been realised. Green (1934) noted that ‘it is not possible to be definite’ about the ground plan of the castle; a point later confirmed by Creighton (1998, 479): ‘the deficiency of the field evidence renders the exact nature and extent… obscure.’ The confusion surrounding the floor plan of the castle has been created by an overall lack of fieldwork and publication on the site. The paucity of research has led to a number of conflicting statements regarding the buildings archaeology. For example, the National Heritage List notes that the farmhouse was built c 1800 and has later nineteenth century elements (NHL 1247955); however, the most recent Pevsner edition notes that it is a seventeenth and eighteenth century building ‘with earlier origins’ (Hartwell, Pevsner & Williamson 2020, 240).

The proposed project to accurately map, assess and date the overall floor plan of the structures at Greasley Castle is long overdue and such building recording of manorial centres is specifically called for by the East Midlands research agenda (Knight, Vyner & Allen 2012, 94).