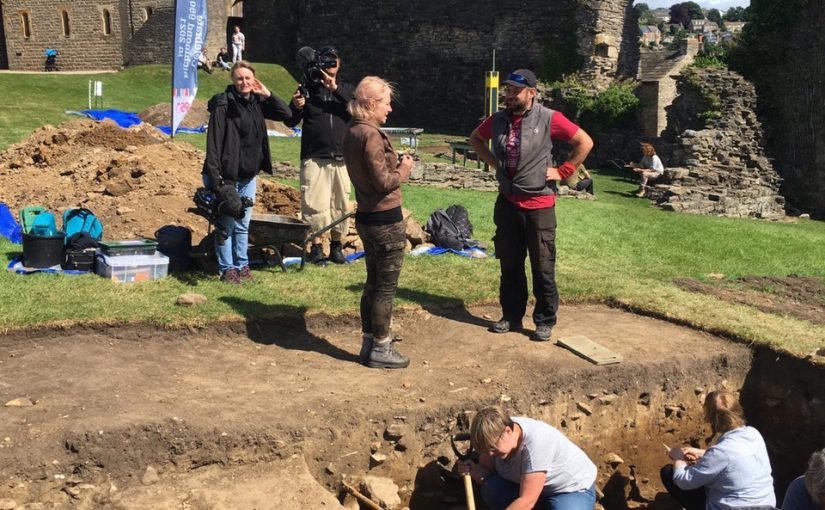 The dig is rattling along really well now as we head towards the end of our second week. We’re bottoming out our questions in Trenches 1 and 2, though the ongoing mystery of our paved surface in Trench 3 continues to tax brains—hopefully the answer is lying deeper in the trench and will be revealed in the next few days.

The main story of today was the excitement generated by the arrival of Professor Alice Roberts and the camera crew from the Digging for Britain series on the BBC. It was a real honour to host the team at Richmond Castle and for our dig to form part of the upcoming series. The volunteers really seemed to enjoy having the cameras on site, and Alice was really enthused by the way in which we are unearthing these forgotten fragments of our history together as a community.

The real star of the day though was a find that came out of Trench 2 just as we were cleaning up for a photo. On her very first day on an archaeological site, from a layer that we had been interpreting as early 14th century in date, Jenny’s trowel flicked over a small disc of metal.

At first, we thought we had another jetton, like the one discovered last week in Trench 3—a fabulous find! After we’d gently cleaned off a little of the dirt, however, it gradually became clear we had something much rarer on our hands. Examining the symbols and barely visible face on the obverse, we realised we were staring into the eyes of William the Conqueror stamped on a silver penny! With specialist conservation work, we may be able to discern the legend around the edge and find out where it was minted. Even with the information we have though, we know it dates to the early years of Richmond Castle, taking our story right back to the very beginnings of the town.