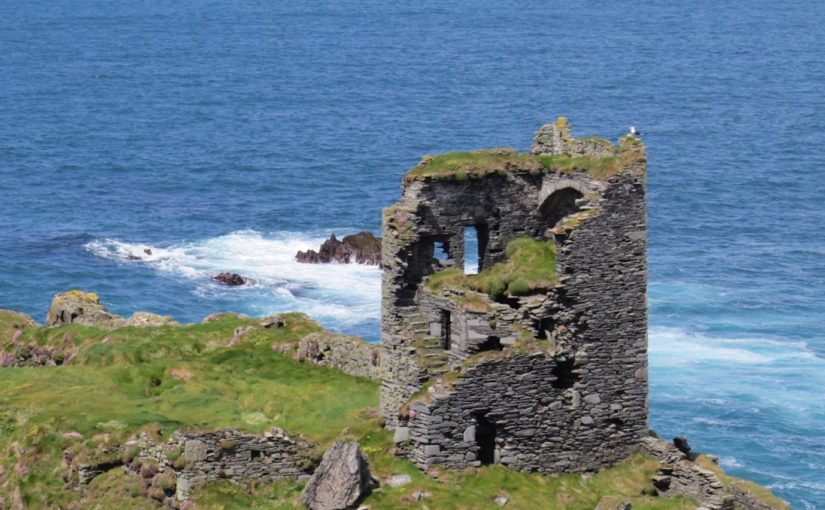 Dr Sarah Kerr of Trinity College Dublin discusses the ongoing project to look at the impact of climate change on castles with a focus on the ones in West Cork, as they are battered by Atlantic storms.

Over the past two years, two small grants (Research Incentive Scheme, Trinity College Dublin, Ireland; and Higher Education Innovation Fund, UK) has funded research into the impact of climate change on built heritages, and the identification of those most vulnerable, particularly in West Cork, in the south-west of Ireland. Dún an Óir is one such castle at risk, on the edge of Ireland, on the brink of the West Cork cliffs and at the mercy of the increasingly frequent Atlantic storms and high winds.

Dún an Óir is a castle at risk, on the edge of Ireland, on the brink of the West Cork cliffs and at the mercy of the increasingly frequent Atlantic storms and high winds. Dún an Óir is an Irish tower house, a type of stone-built castle, smaller than the sprawling castles built by the Anglo-Normans, such as Trim, County Meath and, indeed, serving a different purpose. The relative small size of tower houses placed their construction within the financial reach of lords, emerging gentry and merchants in both rural and urban areas. Tower house construction commenced on the island of Ireland (Ireland hereafter) in the mid-fourteenth century and flourished in the fifteenth and sixteenth, construction ceasing by 1650. Their abundance led Terry Barry to state that Ireland was ‘the most castellated country in Europe in the late middle ages’ (Barry 2008, 129) or at least ‘one of the most castellated parts’ of the Irish and British Isles (Cairns 1987, 31; O’Connor 1998, 25). If so, then Munster in the south-west of Ireland was a focal point of this activity. The West Cork area in the south-western extent of Munster contains 47-known tower houses, many concentrated along the jagged and island-dotted Atlantic coast. The West Cork tower houses are of particular interest as they are the only castle type remaining in the region; plus, contemporary written evidence allows the majority to be ascribed to a certain clan.

Dún an Óir (Doonanore when anglicised) is located on the island Oileán Chléire (Clear Island), approximately 13km from the Irish mainland. It was built by the O’Driscoll clan in the mid-sixteenth on a coastal promontory (Figure 1). Located on the coast, along with several other known O’Driscoll tower houses, its occupants could oversee the movement of goods through Roaringwater Bay as well as charge passing vessels for anchorage, victualing and exploitation of the waters (Figure1).

This once strategic position is Dún an Óir’s Achilles heel. The building and its immediate landscape are precarious, unconsolidated and unprotected (Figure 1). Exposed on a partially collapsed promontory, its long-term survival is unlikely and our time to understand it short.

Dún an Óir comprised four-storeys rising from a rectangular ground-plan. Access was through the south wall, although the east wall faced the neck of the promontory (where it connected to the remainder of the island). Much of the south wall has collapsed yet a garderobe tower remains to the east of the door (Figure 2). Above the doorway a mural staircase (built within the thickness of the wall) can be seen leading to at least the first and second floors. There is a vaulted ceiling between the second and third floors in the form of three pointed arches separated from one another by overlapping slabs.

A significant and surviving feature of Dún an Óir is its bawn (curtain wall): a stone wall which in this case abuts the tower house (rather than surrounding it) and stretches west to enclose the remainder of the promontory (Figure 3). Vicky McAlister’s recent book on tower houses indicates that the survival rate of bawns is low compared to the tower houses themselves (McAlister 2019, 22), recalling earlier suggestions that the current 1 in 5 survival rate may be representative of their former inclusion. Dún an Óir is a relatively rare example of preserved ancillary buildings within the bawn. Although they remain only as overgrown footings, there appears to be a kitchen with oven, and two more apparently feature-less buildings that appear to be contemporaneous with the bawn wall (Figure 3).

Dún an Oir’s bawn reaches to the edge of promontory, almost certainly to be further damaged or lost in this lifetime. With this seemingly fixed future, the onus shifts to the researching community in the present to document what we can: this is discussed further in a recent paper on the castle (Kerr 2019). The erosion to the promontory renders further buildings survey, as well as geophysical survey or excavation, no longer safe. Therefore, the next steps of fieldwork may include airborne LiDAR. Greater exploitation of innovative surveying methods may overcome the difficulties posed by the physical landscape and allow the tower house, bawn and ancillary buildings to be understood to a greater depth before the inevitable happens.