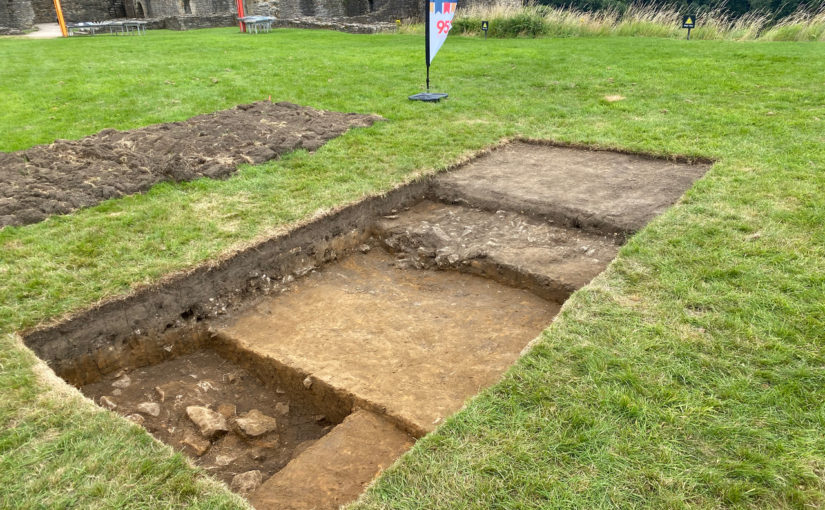 So, at the end of a frantic and incredibly hot first week on site, it’s time to take a day off and let things marinade a little.

It has been a joy and privilege to work with so many enthusiastic and dedicated volunteers. We have had people of all ages coming and getting stuck into the digging—sometimes it’s been delicate and sometimes it’s been fairly heavy going with mattocks and shovels—and not a single frown or grumble!

So, where have we got to?

It’s very much been an archaeological tale of two halves.

Firstly, we have the small finds that have been coming out of the ground. As I’ve mentioned in some of the earlier posts, we have had some really illuminating items, including: a fine selection of different kinds of medieval pottery, an impressive collection of animal bone (turns out it was probably a deer jaw not a horse!) with marks of butchery on them, and a lot of more recent items relating to the late Victorian and early 20th-century use of the Castle.

Some of my favourite objects have been those that have a really personal connection, however. In all the trenches we have found a fair number of graphite ‘pencils’, giving a lovely image of the army trainees at the camp in the 1900s feverishly noting down instructions and reminders.

Whilst the artefacts are giving us a general picture of all the different periods of the Castle’s history, the second part of our story comprises the archaeological deposits and layers themselves. Here, we have very much been digging our way through the deep deposits dating from 1850 onwards: the army parade ground and the mid-20th-century landscaping to turn Richmond Castle into the tourist site familiar to visitors today.

The possible wall we were so excited about on Tuesday evening turned out to be part of the drainage system from the parade ground, but as the sun was dipping on Friday we started to see tantalising hints that the loose stone lies on top of a much more well-built structure—our first hints of undisturbed medieval deposits!

So, if week 1 was spent in the time of Baden-Powell and the Richmond Sixteen, then it looks like week 2 will be when we make our acquaintance with the lords, ladies, knights and commoners of medieval Richmond.