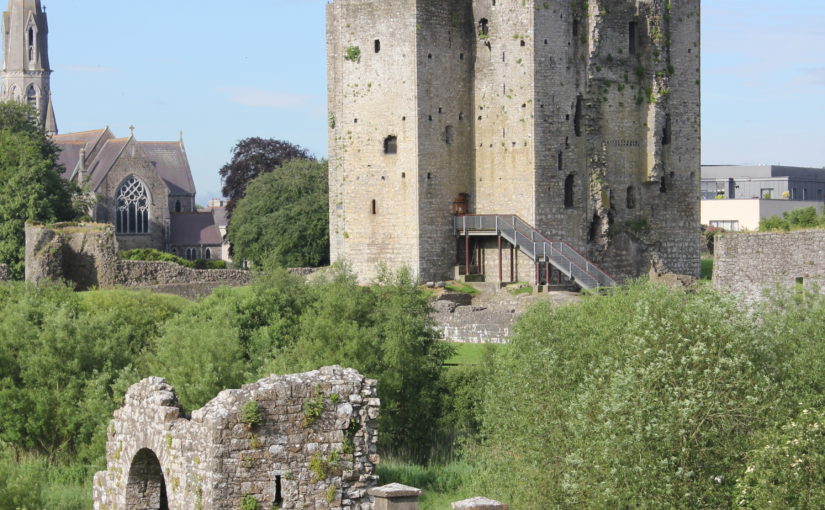 Scott Stull, archaeology lecturer at SUNY Cortland, looks at the results of an interdisciplinary led by Physicist Michael “Bodhi” Rogers, that he took part in looking at the landscape and viewscapes of Trim Castle.

Trim Castle, in County Meath, Ireland, was built starting in 1187 by the De Lacy family as part of the Anglo-Norman conquest of Ireland. After a long history of conflict, disputed ownership, expansion, change, and decay, the castle was finally abandoned in the mid-sixteenth century when it was described as being full of cattle and dung. The medieval landscape around Trim is remarkably well preserved, including the walls of the town, a fourteenth-century bridge over the River Boyne, a variety of religious institutions, and the farmlands, called the Porchfields, which still have their ridge and furrow plough marks.

In 2016 and 2017, Michael “Bodhi” Rogers led a team of students to digitally record Trim Castle and the surrounding landscape. That scanning project was described in Archaeology Ireland (https://www.jstor.org/stable/pdf/26565802.pdf). The results of that project allowed further study and analysis of the landscape, and specifically the viewscape, of Trim Castle. In a three-way interdisciplinary project, Scott Stull (archaeology), Michael “Bodhi” Rogers (physics), and Michael Twomey (medieval literature) looked at Trim Castle and how the views from the castle were carefully constructed as part of the creation of medieval power and authority.

The starting point for this study, which is a chapter of the upcoming volume, Bailey, Kinsella, Thomas (eds) Architectural Representation in Medieval Textual and Material Culture (Arc Humanities Press, 2022), is the concept of the cultural landscape. The cultural landscape is how people shape a landscape and put meaning on it, to influence perception, behaviour, and patterns of social interaction. It can be practical, such as food production, or it can be tied to belief systems, such as religious sites, places associated with an ethnic or group identity, or associated with structures of power and authority. Castles, while often associated with military activity, embody most of these elements, and as part of the cultural landscape help create beliefs that support those practices and perceptions.

Viewscapes are a specific aspect of a cultural landscape, and in this case are the views from the castle. At Trim, the castle is placed to oversee the town, roads, bridge, farm fields, and religious institutions. There are a variety of ways to identify and record viewscapes, such as with mapping and GIS systems (for example: Lisa Karen McManama-Kearin, The Use of GIS in Determining the Role of Visibility in the Siting of Early Anglo-Norman Castles in Ireland, BAR British Series 575, Oxford: British Archaeological Reports, 2013). Our study, overseen by Bodhi Rogers, used ground-based lidar to make a 3D record of Trim Castle and its surroundings. The result of the recording is effectively a 3D photograph which you can examine from any angle or point in space. This allows us to see from windows which are inaccessible physically, or from spots which have been lost due to decay or collapse over time.

While a useful modern tool, viewscapes were a fundamental part of the medieval understanding of castles. We see castles used as viewing platforms, as symbolic places of literal and figurative elevation, and as part of medieval romances where the view from the window represents both the desire and distance of a romantic attraction. In many cases, the lady views the desired knight from the castle window, and the knight is inspired by the glimpse of the lady in the window, affirming the ideals of courtly love. Religious allegories have the castle as a tower of morality, and the viewscape is often overlooking humanity in all its faults and mundanities. By looking at medieval literature, we can gain an understanding of the medieval mindset.

Combining the physical context of a castle with the medieval mindset allows us to gain a more complete understanding of medieval life. The nobility used castles as structures of power and created a cultural landscape which made that system of power seem normal and natural. Castles were a central part of everyday life in medieval Europe, and the lived experience of medieval people was shaped by the created landscapes in and around a castle. At Trim, the castle overlooked the social and economic centres of the community, from the Porchfields to the monasteries. The viewscapes from the castle were specifically created to reinforce the position of the De Lacy family and its successors over the lands and cultural landscape in Trim. Trim castle was the dominant element in both the physical and social landscape.